Australia’s newest winter major event, Illuminate Adelaide, celebrated its inaugural year in 2021 and wanted to establish a unique, signature project. Moment Factory, headquartered in Montreal and with offices in Paris, Tokyo, Singapore and New York City, were the people to deliver it.

With a solid track record of creating amazing site-specific sensory experiences all over the globe, along with design work for Billie Eilish, Halsey, and Childish Gambino, Illuminate Adelaide had found the right people. However, creating & producing a project from Montreal to Australia in the middle of a pandemic, with border closures, was going to be an issue.

Initial conversations with Moment Factory in the constrained context of the pandemic immediately had to look at how this new event could be realised remotely with the Moment Factory creative and production teams in Canada and the Illuminate Adelaide team translating on-the-ground details of the Adelaide Botanic Gardens.

Illuminate Adelaide were confident that working with their local tech partner Novatech Creative Event Technology as collaborators, they would be able to realise Moment Factory’s vision. With a track record of delivering international creative projects remotely, such as 2019’s Borealis for Adelaide Fringe on behalf of Switzerland’s Happy City Lab, Novatech had experience in the field, and the parties began a series of discussions over Zoom to see how the vision could be delivered.

“The initial discussions were so we could each gain an understanding of who we are and what technology we can offer,” explains Novatech’s managing director Leko Novakovic. “On those calls, we connected, and gained the immediate understanding that we each knew what we were talking about, expected the best, and want anything we do done properly. That put us in the right frame to go forward with the project.”

Encompassing nearly two kilometres, Light Cycles features seven unique immersive installations; Suspended Light, Into the Sunset, Forest Frequencies, Crystal Grove, (IN)Visible, Reflection Lake, and The Hearth, that each encourage newfound connections with nature. Dedicated transitions helped guide guests from one installation to the next as they discovered the Gardens’ beauty by night. The experience was designed to last 45 to 60 minutes, with most audience members spending 90 minutes.

To support Moment Factory’s design, Novatech divided the Light Cycles experience into eight timecoded zones, with their own local racks of gear, with a control HQ in a building central to the Gardens. Each zone’s creative was a loop that ran from four to seven minutes, including lighting, video, lasers, practical effects and multichannel audio. Some technologies were consistent across the installation, others were specific to each zone.

The remote rack system in each zone housed the local tech as required, which included amps, media servers, LED controllers, and the network switches handling the main and redundant fibre connections linking Light Cycles together in a ringed loop. Novatech’s resident problem solver and Technical Director, Menk Novakovic found special climate-controlled tents to protect the racks from the weather, with their own AC and network connectivity for monitoring. Just as well, because opening night was cancelled due to a fierce storm!

The lighting system was built to run off the MA platform, with a grandMA3 light at HQ, and eight separate instances of MAonPC running on virtual machines. Moment Factory had their programmers and designers pre-visualising using MA, which transferred seamlessly to Adelaide. “Moment Factory has developed their own proprietary in-house control system called X-Agora,” divulges Leko. “However, due to the temporary nature of this installation, Moment Factory proposed that we work with a system that was more familiar to us. As such, they were happy to share the design specifications and system topology of what they wanted to achieve, and let us propose a system design that checked all the boxes. We went for a design that kept all parameters in mission control and sent out to the rack nodes in each area.”

Novatech developed their own dashboard for their control system to monitor all aspects of the system at HQ. “Everything cycled on screens we had around the control room,” illustrates Leko. “We could see the status of every fibre connection, each MAonPC session, L-Acoustics Network Manager for the audio system, each of the eight QLab sessions, and the MadMapper pixel mapping software sessions. We could also remote into the network and get all of this if necessary. We used Q-SYS as the interface to get every piece of software to talk to the dashboard through the network. It was a significant network deployment, running 10GB fibre and 10GB switches, through two multimode fibre cables to each zone.”

A huge variety of lighting fixtures, LED products, and vision were deployed, chosen or manufactured in collaboration with Moment Factory. “Some lighting elements were very specific because they had to be,” reveals Leko, “and some were chosen through various field testing both in the Gardens and at Moment Factory’s Forest Lab outside of Montréal. We went on-site for testing during development, as did Moment Factory over in Canada. We projected video onto stands of bamboo. We’d run up different lights and take photos and videos to share with the team in Montreal. There was a lot of experimentation, especially for looks like the custom pixels for ‘Crystal Grove’; before we were going to manufacture 2,000 of them, someone needed to sign off!”

‘(IN)Visible’ carried the bulk of the video used in Light Cycles, with a serious 13 projectors fed by a disguise server in its local rack. ‘Forest Frequencies’ used ROE video strip fed by Brompton processing. Audio was L-Acoustics throughout. “All zones used L-Acoustics loudspeakers run by L-Acoustics amps,” elaborates Leko. “We were able to use L-Acoustics Network Manager software to monitor the system, and L-Acoustics Soundvision software to design each zone, with different loudspeaker models for each zone depending on what it needed. The soundscapes were between eight and 20 channels, played out of QLab, so we went through a lot of amp channels. Audio was networked on Dante, with AVIO adapters in each remote rack to get into the amps.”

With multiple sold-out sessions and incredible audience demand, Light Cycles original season was extended by three weeks, closing Sunday 22 August. A universal critical success, tens of thousands of people made the journey through the Botanic Gardens to experience the work, and businesses in the CBD reported that trade was up 35% as a result of the festival as a whole. Illuminate Adelaide will return triumphantly in 2022. 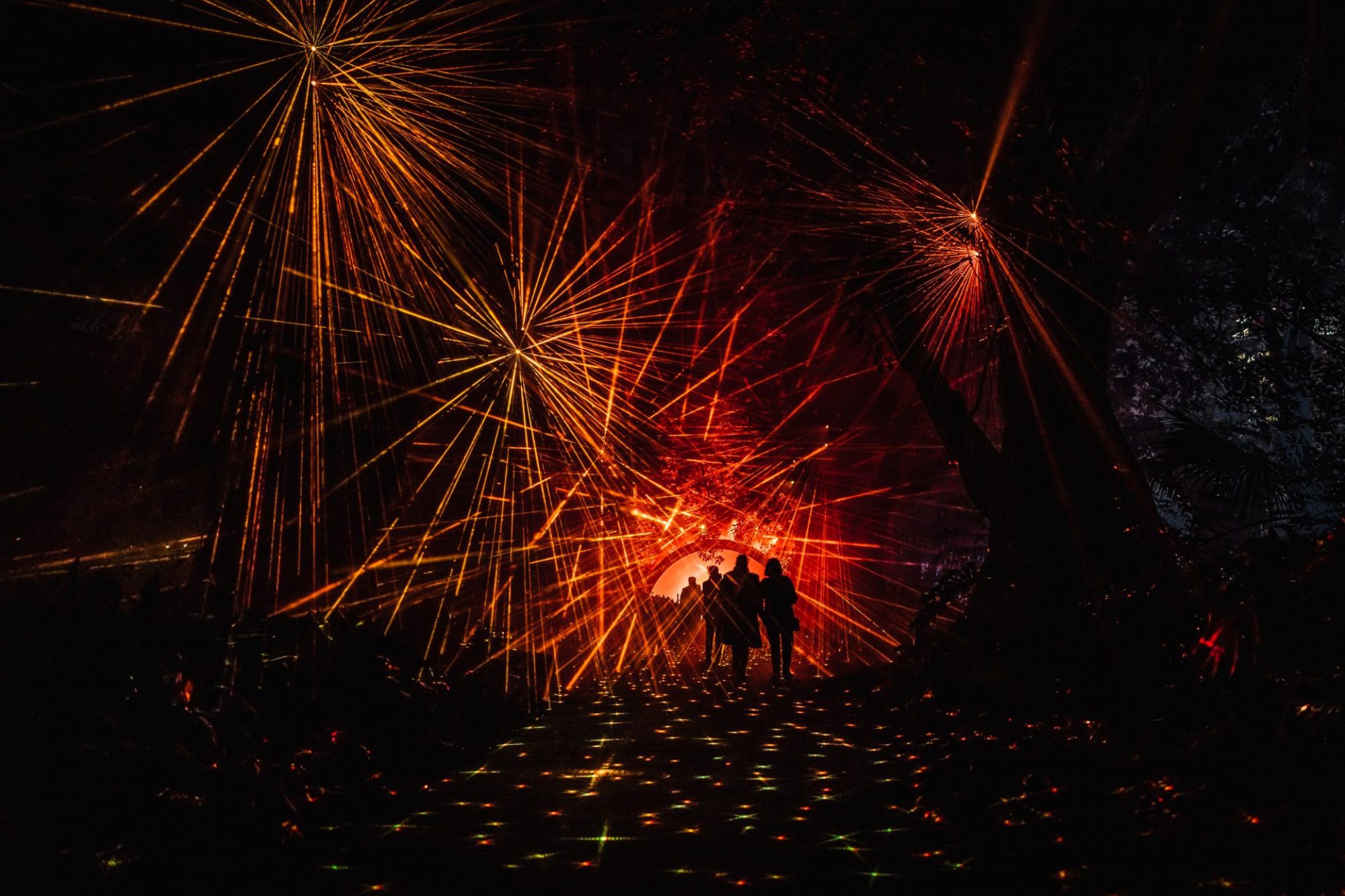 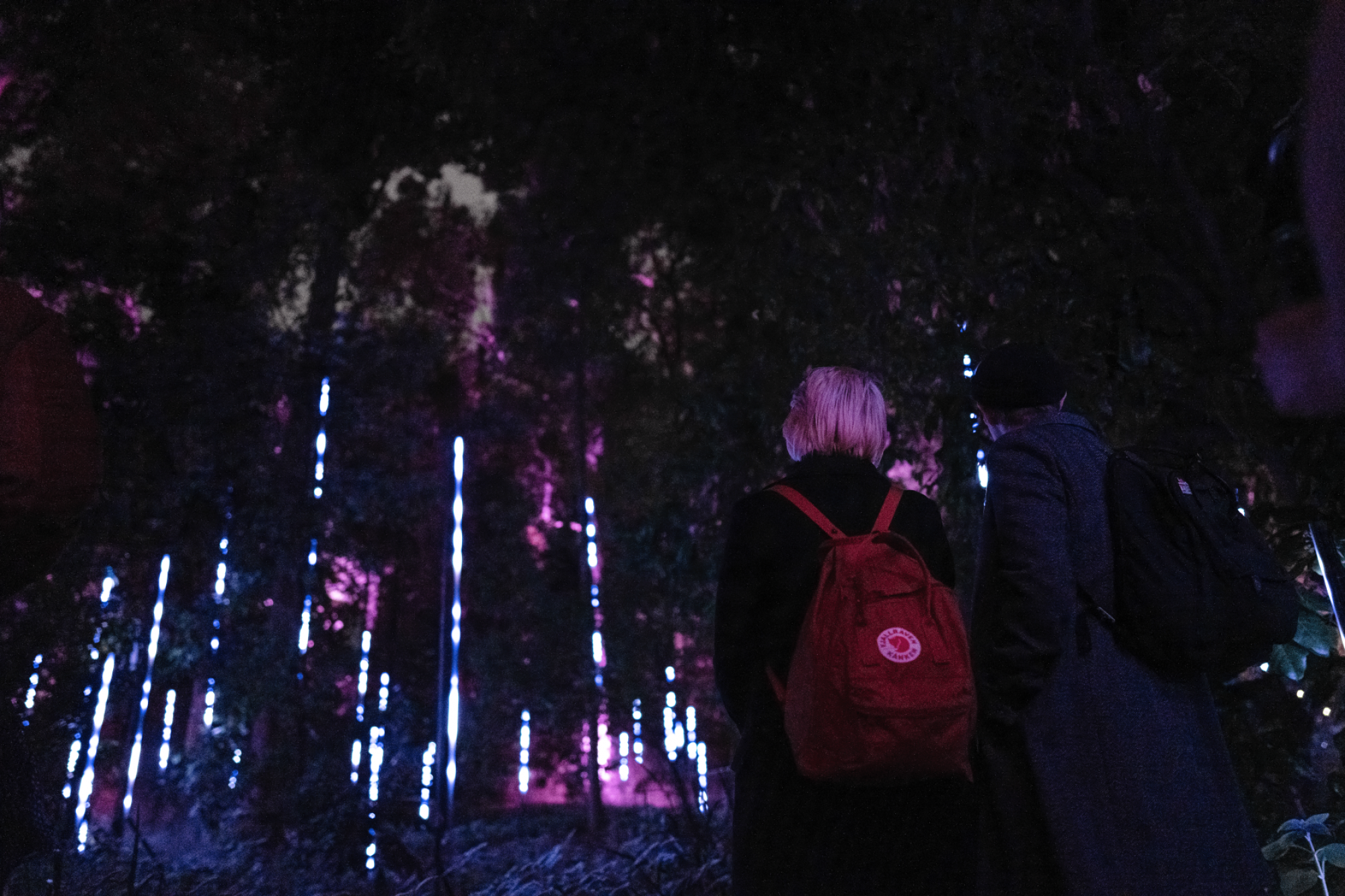 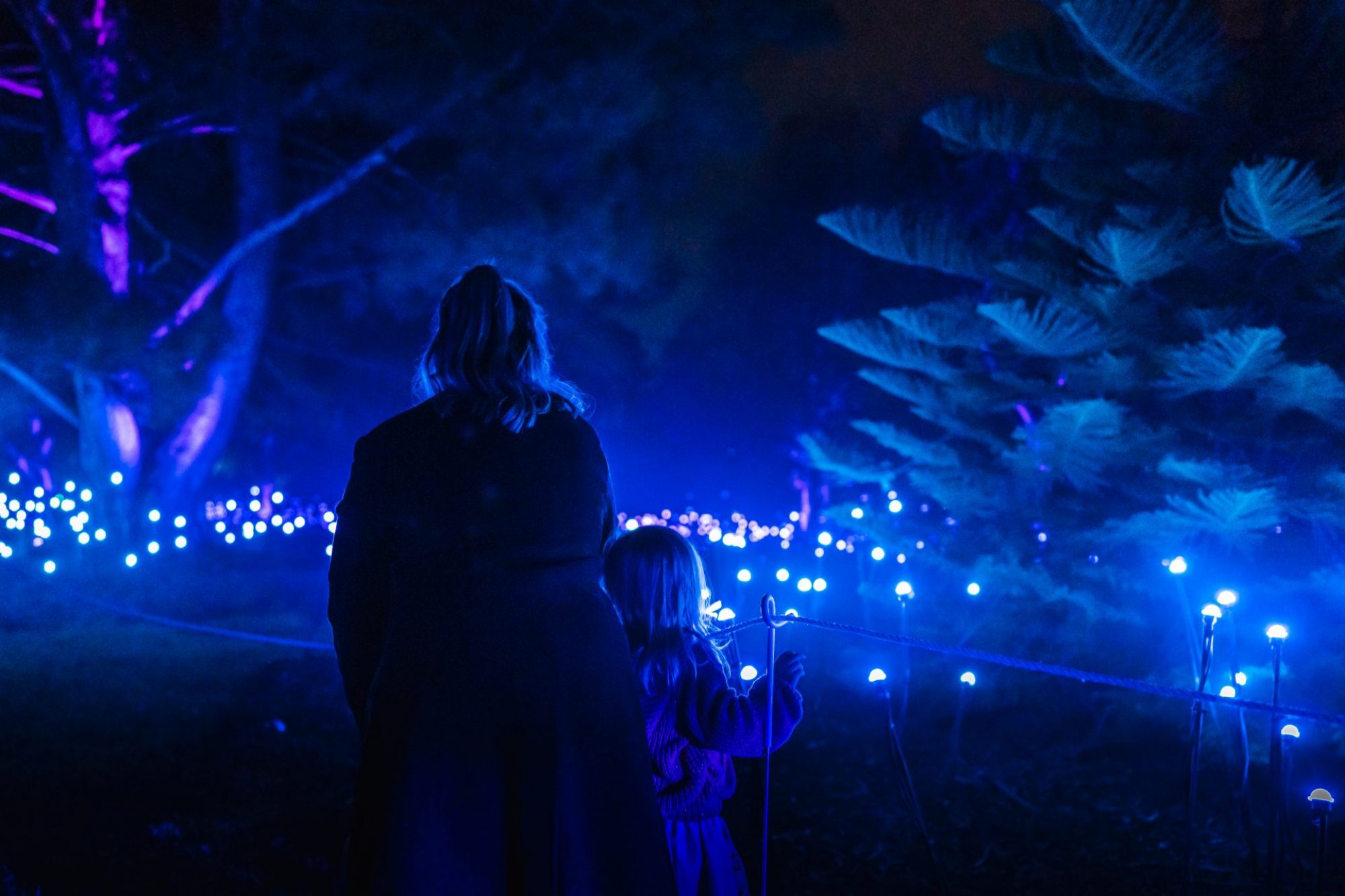 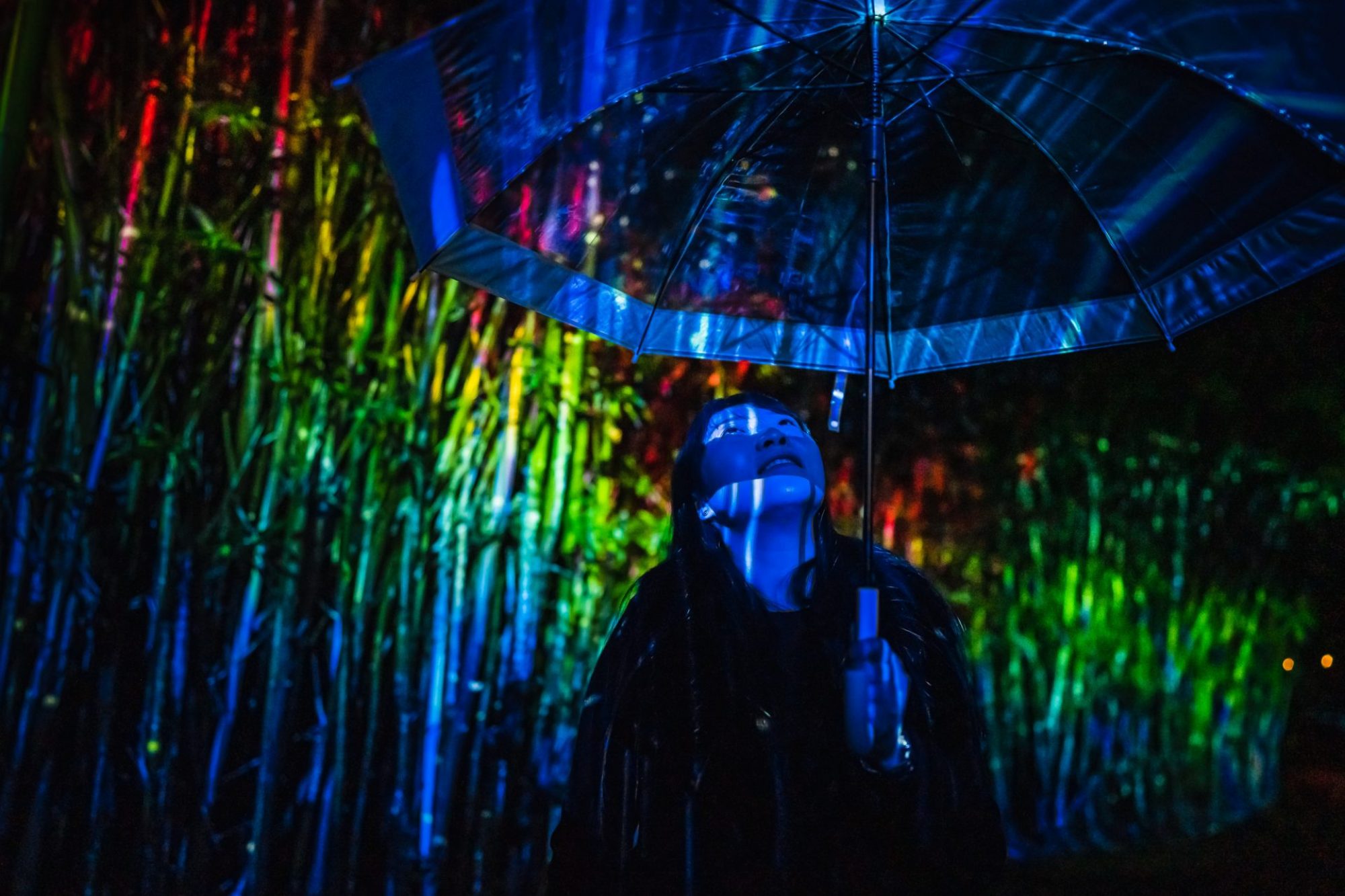 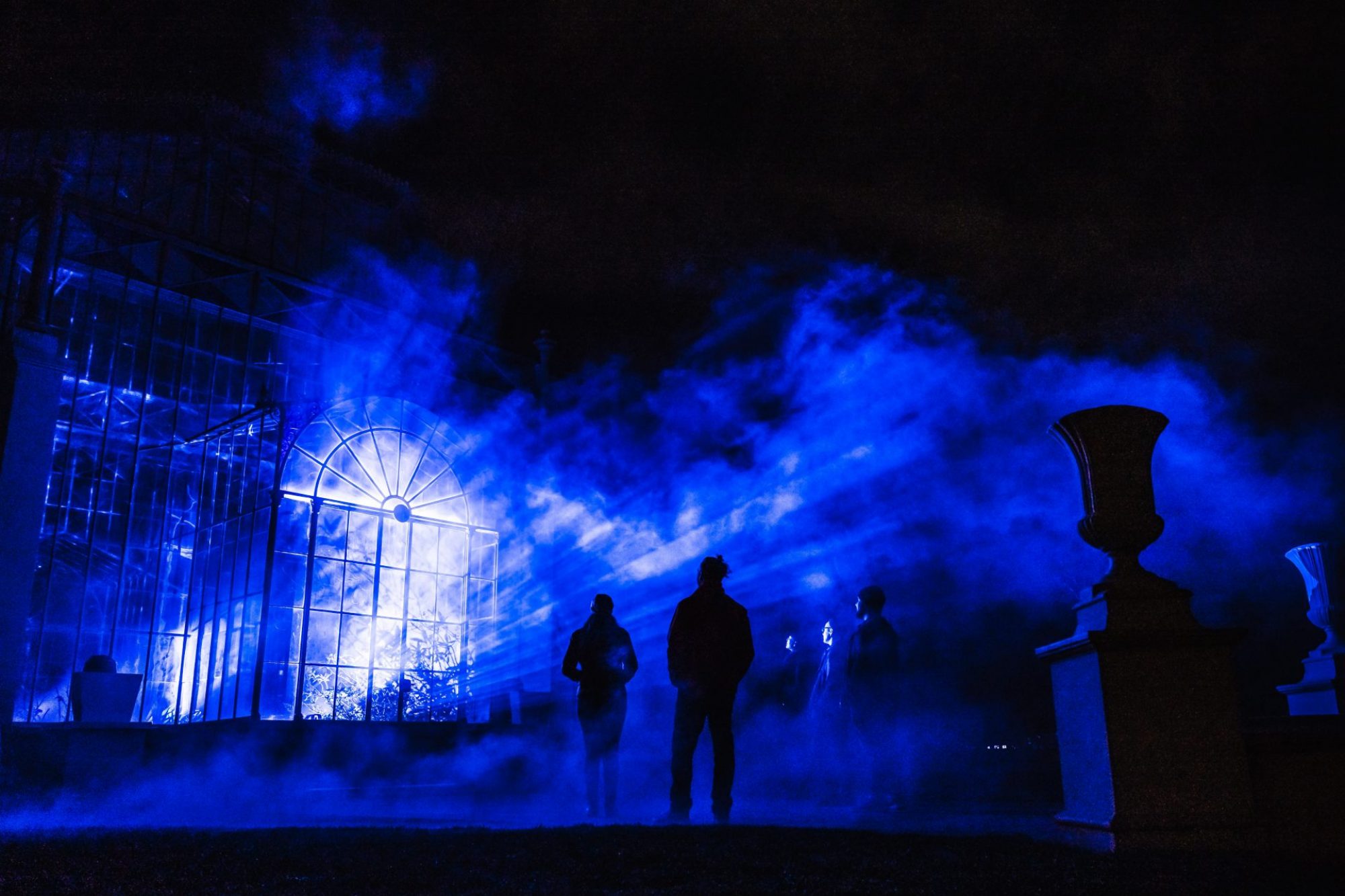 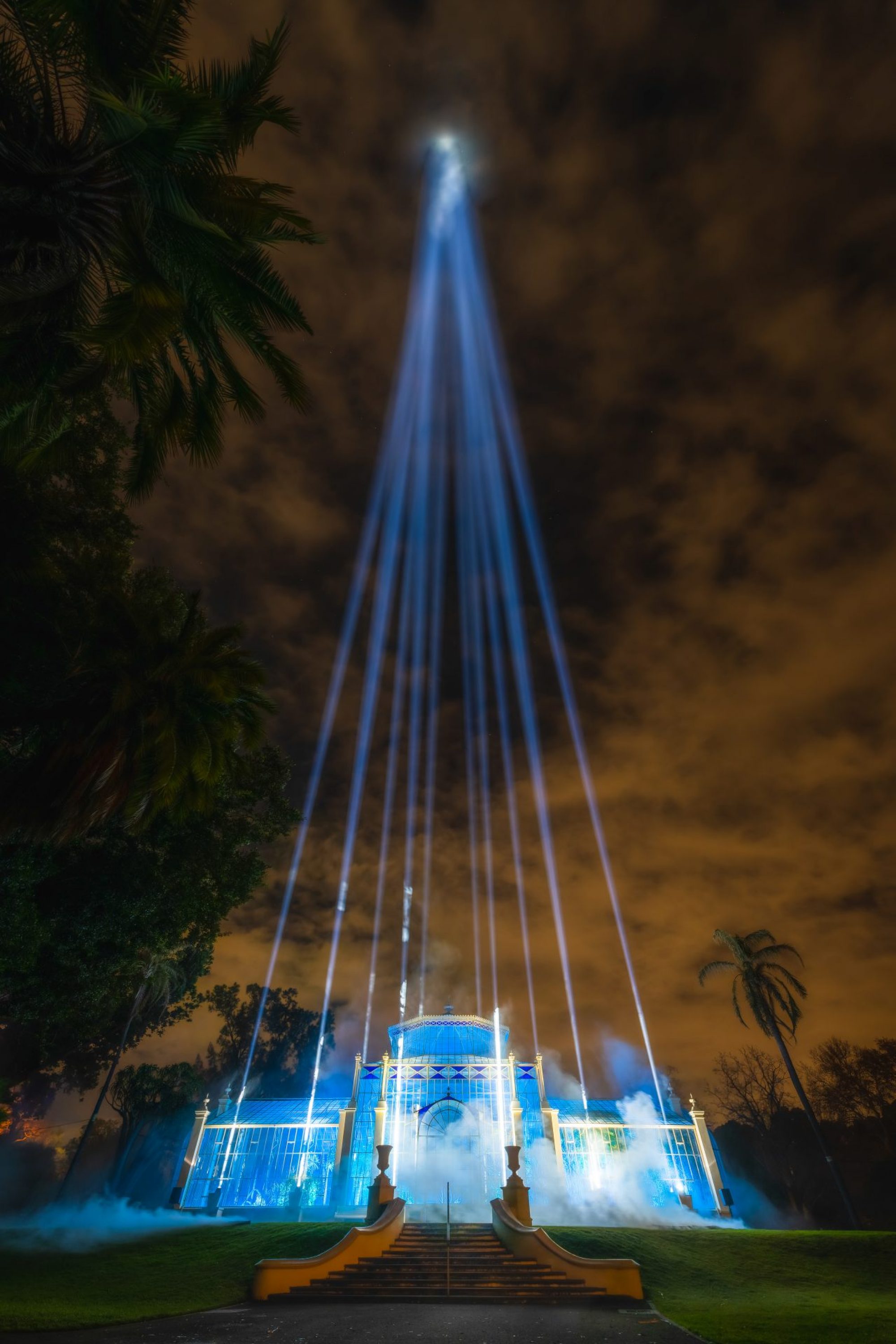