Back for its second year, Illuminate Adelaide took over the SA capital’s streets from 1 July to 14 August; quite literally in the case of Ouchhh Studio’s monumental Wisdom of AI Light in Rundle Road. Housed in the purpose-built ‘Illuminate Pavilion’, measuring a whopping 60 metres long by 22 metres wide and up to 13 metres tall at its peak, the multimedia work blended art and science with artificial intelligence, immersing audiences in a 360-degree projection canvas with accompanying soundtrack.

Turkey’s Ouchhh Studio have won multiple international awards for their work, which uses data and AI across new media platforms including video and projection. Wisdom of AI Light is a 36-minute experience divided into five chapters. Sources of data and art used for the piece include Leonardo Da Vinci, Galileo, Einstein, the ancient Göbekli Tepe archaeological site, CERN’s Large Hadron Collider, and NASA’s Kepler telescope. Millions of data sets were fed into AI to generate the work, and it’s all soundtracked by the famous Italian composer Ludovico Einaudi.

Illuminate’s Technical Manager, Jayden Sutherland of The Bakery Design Co., was responsible for orchestrating the massive effort to stage the work, which included Nexstage building the Pavilion, Theatre Safe Australia constructing the projection surface, Novatech installing and calibrating the video and audio, and Ouchhh’s director Ferdi Alici visiting to ensure it wall delivered correctly. And all of this in just under three months…

“We had about 12 weeks from the idea for the work being talked about to being onsite,” reports Jayden. “While Ouchhh had presented similar works in Germany, the US and Turkey, this iteration was designed especially for Adelaide, and re-rendered for the Pavilion’s canvas. We provided all of the modelling and content workflows, and Ouchhh matched our canvas, which came to about 135 million pixels and four terabytes of content.”

Blocking off a major thoroughfare in Adelaide’s East End with a massive structure was no small feat. The site was scanned with LIDAR, and public entrance and exit points mapped. Some lampposts had to be removed to accommodate the Pavilion’s height. Vectorworks was the software tool of choice for physical design, with Autodesk 3ds Max for modelling, and a combination of Vectorworks and disguise for projection design.

The heart of the projection design utilises four disguise 4x4pro media servers with another as backup. The servers feed 14 Barco UDM-4K22 projectors beaming along the length of the structure, with two Barco UDX-4K32 projectors covering the end walls. “We had to use 4K projectors because of the audience’s proximity to the projection surface,” explains Jayden. “Pixel size was the most important factor, then brightness. We painted the walls with grey projection paint to improve contrast, and we managed to get the pixel size down to 3.5mm.”

In order to cover the projection canvas from the designated rigging points, Novatech invested heavily in new Barco TLD+ Ultra Short Throw lenses to be fitted to every projector. “They look like a weird snorkel, and have a 0:4:1 ratio,” says Leko Novakovic, Novatech’s Managing Director. “There’s four 4K outputs on fibre from every disguise 4x4pro to every projector, with an HDMI fibre backup. We used our Lightware UBEX hardware for signal distribution; their matrix got us 4K 60p to all projectors.”

To create the best possible immersive environment, there’s a custom black marquee roof and extrusions, and everything that runs the show is black; the truss, the chain motors, the projector sleeves, the loudspeakers, and the cabling. Everything is trimmed to maximum height. The projectors are organised into ‘pods’ of five, so if anything needs to be lowered to be replaced, only one set would need to be re-aligned.

The sheer scale of the resulting canvas is daunting. “When we were building it, it seemed big,” observes Jayden. “But the more that went up, it just kept feeling bigger and bigger. Ultimately, the projection surface is a whopping 52 metres long, 16 metres wide, and eight metres tall.”

The accompanying soundtrack, which moves from gentle contemporary classic to thumping industrial, is relayed by four hangs of three L-Acoustics Kiva down each side of the room, focussed down. Four pods of L-Acoustics X15 HiQ and SB180 subwoofers cover the centre, and a pair of X15 HiQs at each end of the Pavilion cover the extremities. There’s a couple of wireless mics on hand for announcements, and a foyer audio system to set the ambience for the audience on the way in. While the soundtrack to Wisdom of AI Light was provided as a stereo mix, the Pavilion’s sound design by Adam Budgen is immersive audio capable, as the structure was designed with re-use for future exhibitions in mind.

Novatech also provided lighting, with Dreamstrip LED pixel strips in the foyer, LED Pars in the main room, LED birdies for signage, and LED strip extrusion around the outside edges of the building. ETC Source Fours fitted with custom gobos wash the external walls.

Physically, the Illuminate Pavilion is constructed around Nexstage’s 2M stage deck integrated with a Layher scaffold platform “It’s an adaptation of Nexstage’s 16 metre truss roof grid with an external pavilion shell that was custom made for this project,” elaborates Jayden. “It’s basically six bays together, to get us out to 60 metres. Nexstage provided the shell, and Theatre Safe Australia provided the internal fit out using 115 8×1.2 metre aluminium and timber flats. There are separate outer structural and inner projection walls to minimise movement from wind and vibration. There’s still challenges keeping the projection in check due to temperature and humidity, but the on-site techs just need to tweak the projection line-up on their laptops occasionally.”

Ouchhh’s director Ferdi Alici came onsite two days before the media preview, which followed a full week of technical work by Jayden and Novatech. “Our team worked on the internal structure during the days and Novatech spent the nights on line-up and content,” relays Jayden. “It was such a short timeline, and one of the most challenging gigs I’ve ever worked on. There’s was a big collective sigh of relief when we opened!”

The 36 minute show ran with an eight minute turnaround between audiences, six days a week for almost five weeks from 11 am to 10 pm. An operator from Novatech was onsite at all times to run the show. which was triggered by FOH staff by a simple button push. Weekends were more often than not sold out, with huge crowds every night. The success of the Illuminate Pavilion and Wisdom of AI Light means Illuminate now have an epic, show-ready canvas to pitch to content creators and artists globally, for festivals yet to come. 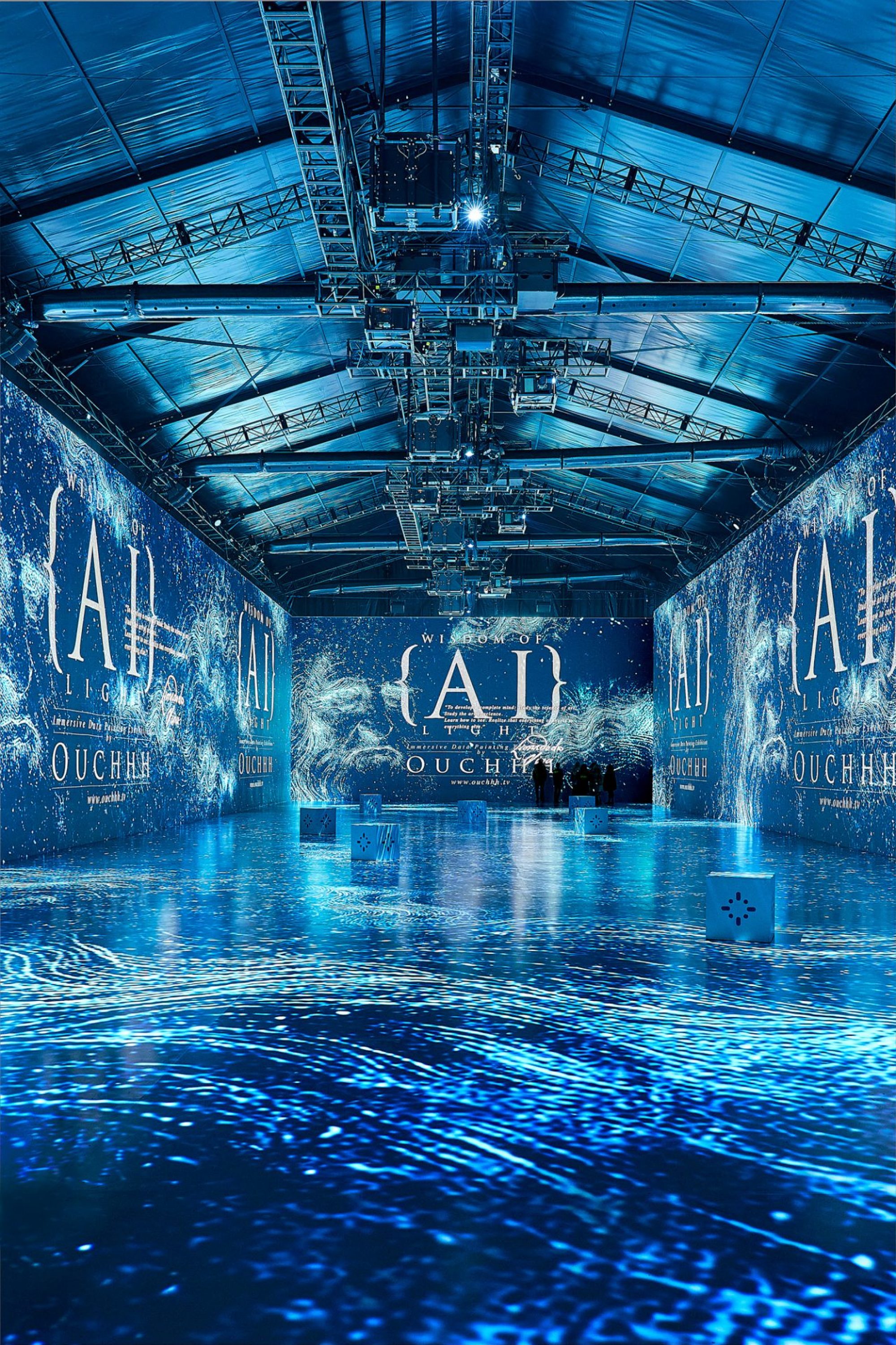 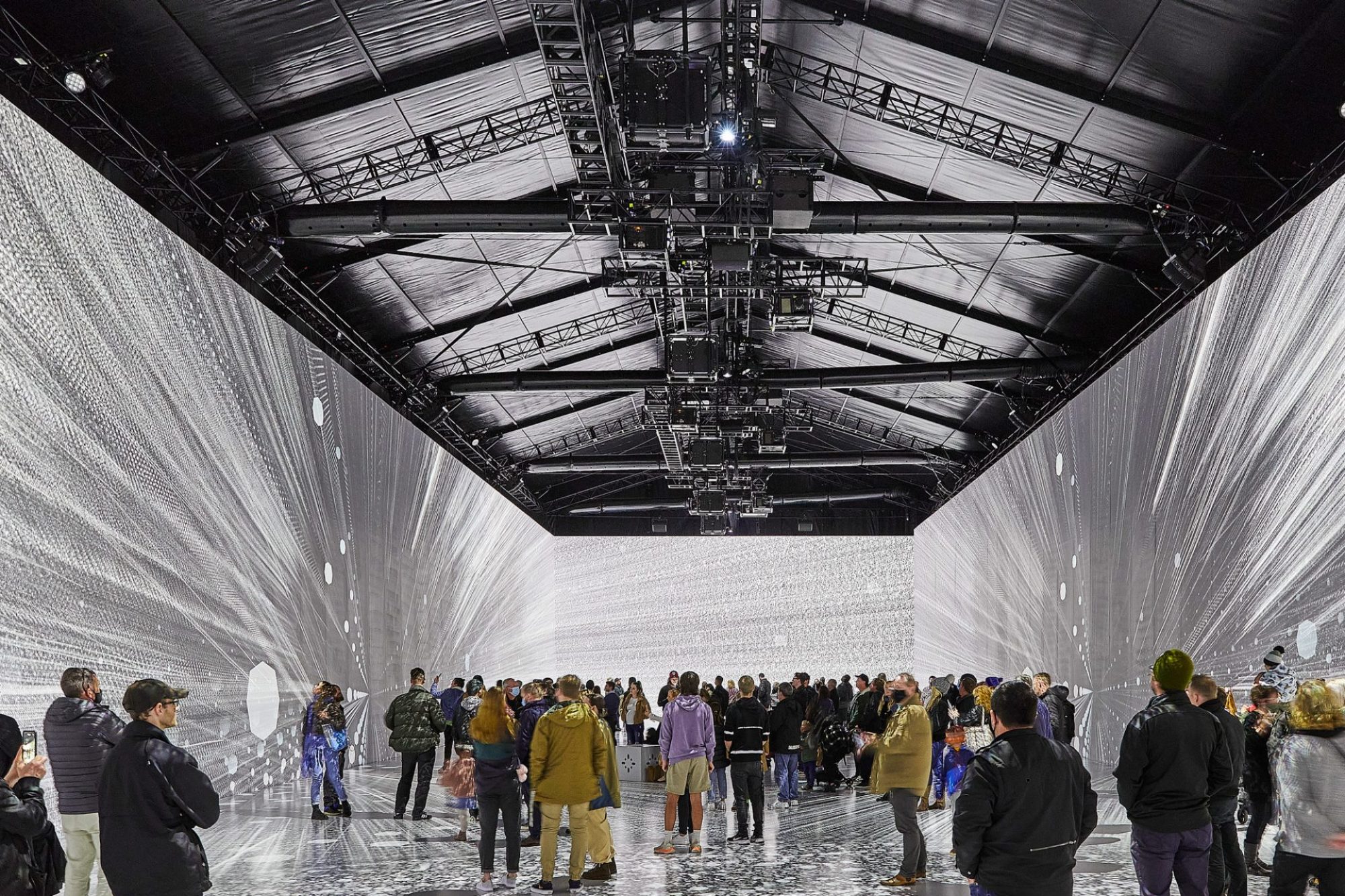 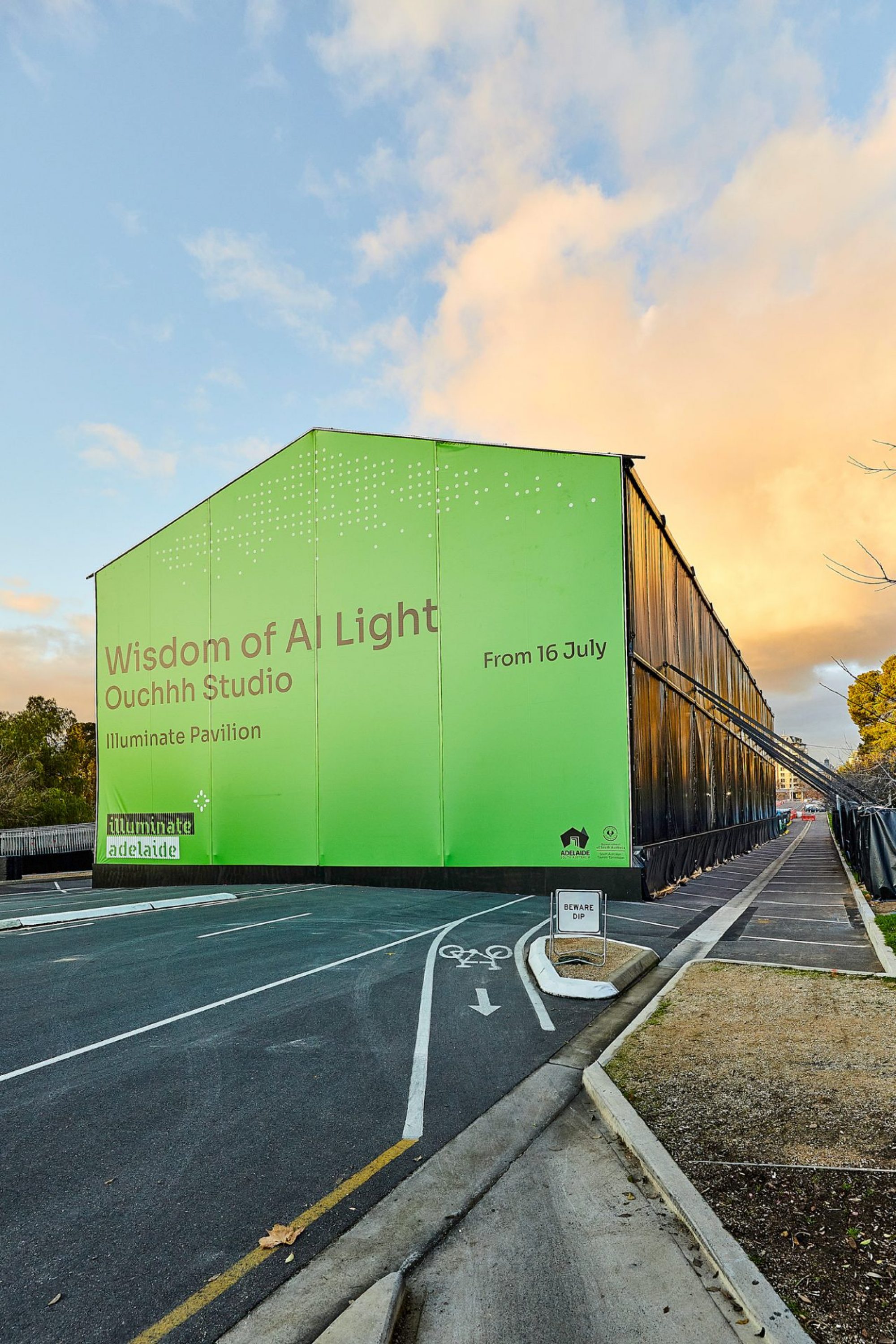