The signature installation of the 2020 Adelaide Fringe Festival, Yabarra – Dreaming in Light, ran at Tandanya National Aboriginal Cultural Institute from 12 Feb to 15 March. Created in partnership with Aboriginal arts collective Yellaka, Epson, Monkeystack, Illuminart and MOD, it told the creation story of Tjilbruke, interpreted by Karl Winda Telfer and the Williams clan of the Kaurna people. Equipped with cutting edge technology and innovative design, Novatech Creative Event Technology were entrusted to bring the story to life.

The exhibition guides the viewer from place to place, mapping the path of Tjilbruke through the geographically significant places of the Kaurna, including the springs along the coast created by his tears as he wept for the death of his nephew. The exhibition flows naturally as pieces of projected and recorded content invite the viewer to stay, look, and listen at significant places. Overhead, a 30-metre continuous projection of The Milky Way runs the length of the gallery, and the constellations known to the Kaurna as emu, lizard and more come to life to guide you to the next part of the story.

The main gallery of Tandanya, some three stories tall and 15 metres wide, was enclosed by Novatech’s drape lines, hung from the gallery’s existing truss. In the space, projection surfaces and screens were carved out, fake campfires were built, textured bush and trees were formed with layers of hung gauze and projections, and a ‘fog-tornado’ was created, the finale of the exhibition, known as the ‘Spirit Wind’.

It’s a masterclass in projection, with 30 projectors from brands including Hitachi, Panasonic, Epson and Fujifilm rigged in every conceivable angle, orientation, and throw. Short-throw lenses, laser sources, and perfectly aligned blending all work together to make the images seamless. Notable is the use of eight Hitachi CPWU600w projectors with short-throw lenses that covered the entire 30 metres of the Milky Way, and the new Fujifilm FP-Z5000 ultra-short throw projector, equipped with the world’s first folded two-axial rotatable lens, which can direct the lens up, down, front, rear, left and right without having to move the main unit.

Novatech’s co-owner, Milenko Novakovic, came across the FP-Z5000 just prior to its release and was so impressed he immediately requested to have the first demo unit in Australia for testing and evaluation. The timing aligned perfectly since it was during the planning phase for Yabarra – Dreaming in Light and Novatech had not invested in smaller projectors for a while. With the installation using more than 30 projectors, Novatech knew that the Z5000s would be a key part in the design. There were some sections that simply did not have the projection distance to cope with, even with short throw fixed lens options, and the Z5000s became the saviours.

The beating heart of the system is two disguise d3 4×4 Pro media servers and a grandMA3 full size lighting console, handling all content, control, and distribution to the main gallery, with a third disguise unit handling the separate ‘Waking Room’. Everything is automated on a daily schedule, with gallery staff totally hands-off. With thorough programming and attention to detail, no tech was required onsite at any time during the run, except to refill the fog machine.

The Spirit Wind – How To Build an Indoor Tornado

The stunning finale of the exhibition, the ‘Spirit Wind’ is a two-storey tall fog tornado that miraculously forms in the middle of the gallery. How was it created? Well, it helps to have a staff member that used to build artificial tornados for Canberra’s Questacon National Science and Technology Centre. Daniel Sisson, an electronic service and repair technician at Novatech, helped develop six hidden tubes that run floor to ceiling around the room, perforated, and fed by high powered fans. The secret is that the vortex is already there when you walk in.

After entering the room and the wrap-around projections tell their story, Tjilbruke summons the Spirit Wind. Through vents in the floor, the fog rises and forms a perfect tornado, accompanied by earth-rattling sound FX, courtesy of four L-Acoustics SYVA. Creating the haze from backstage is a Topcat H-SW3000 Low Water Fog Machine, which uses ultrasonics to break water molecules into haze. Mounted above the tornado, a GLP Force 120 x 120 fan sucks the haze up into the ceiling, lit by GLP Impression X4s and SGM XC-5 Colour strobes.

Hearing and Seeing the Story

There’s audio throughout each station of the exhibition, as the story is told by different members of the Williams clan, across generations. If you’ve ever wondered what those Sonance RK63 loudspeakers that look like rocks are for, it’s this – there’s four in campfires and other bush tableaux around the exhibition. 24 Yamaha VXS5 surface mount two-ways are rigged and hidden in every conceivable place, powered by Yamaha XMV8140 and XMV4140 multi-channel amps.

It’s hoped that Yabarra – Dreaming in Light will find a new life after the Festival, touring to take the Dreaming story to other cities and countries as a cultural exchange. While the global landscape has completely altered since its opening run, at the time of Adelaide Fringe, the SA government was already seeking new avenues to share Yabarra with the world. 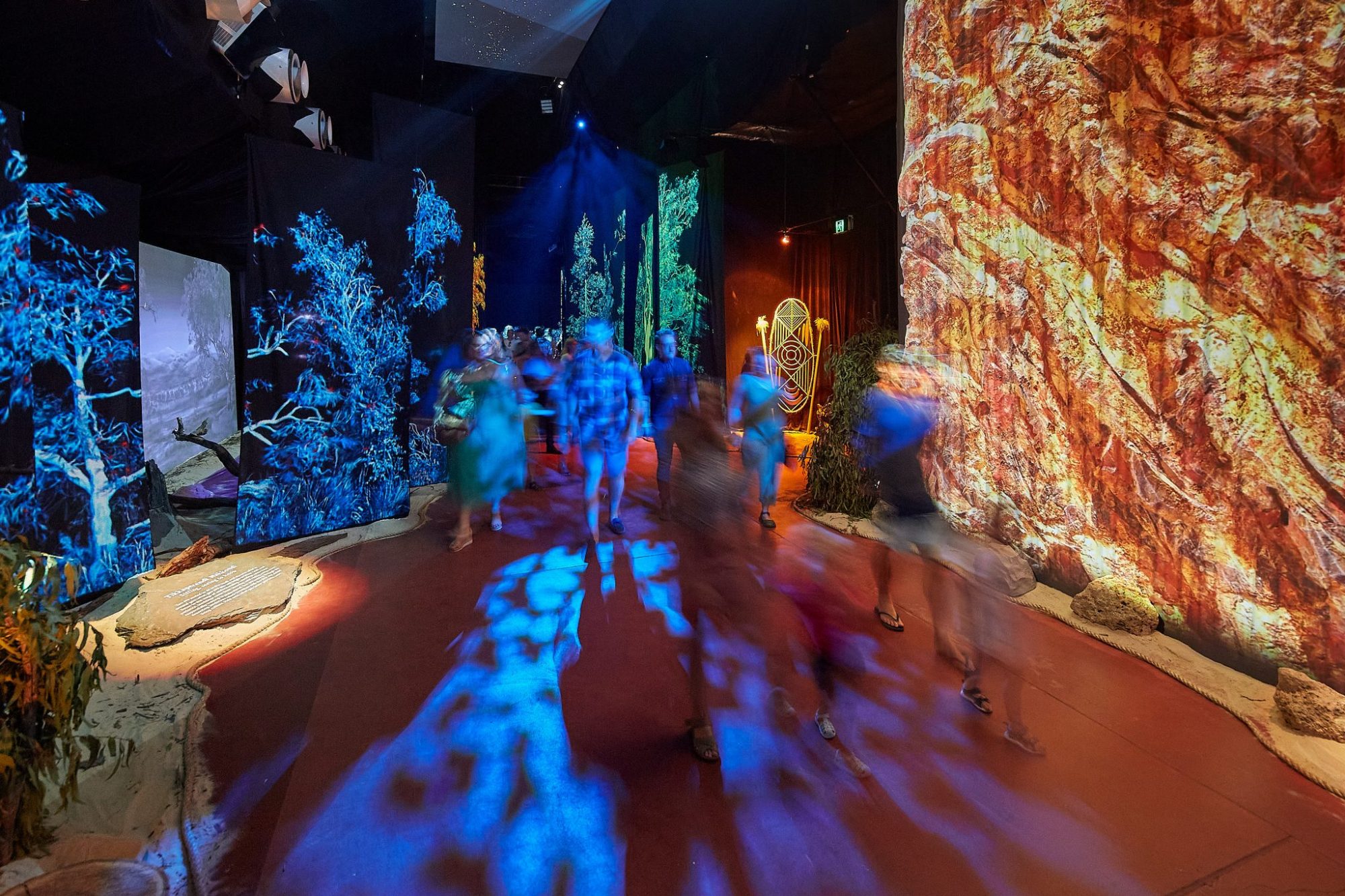 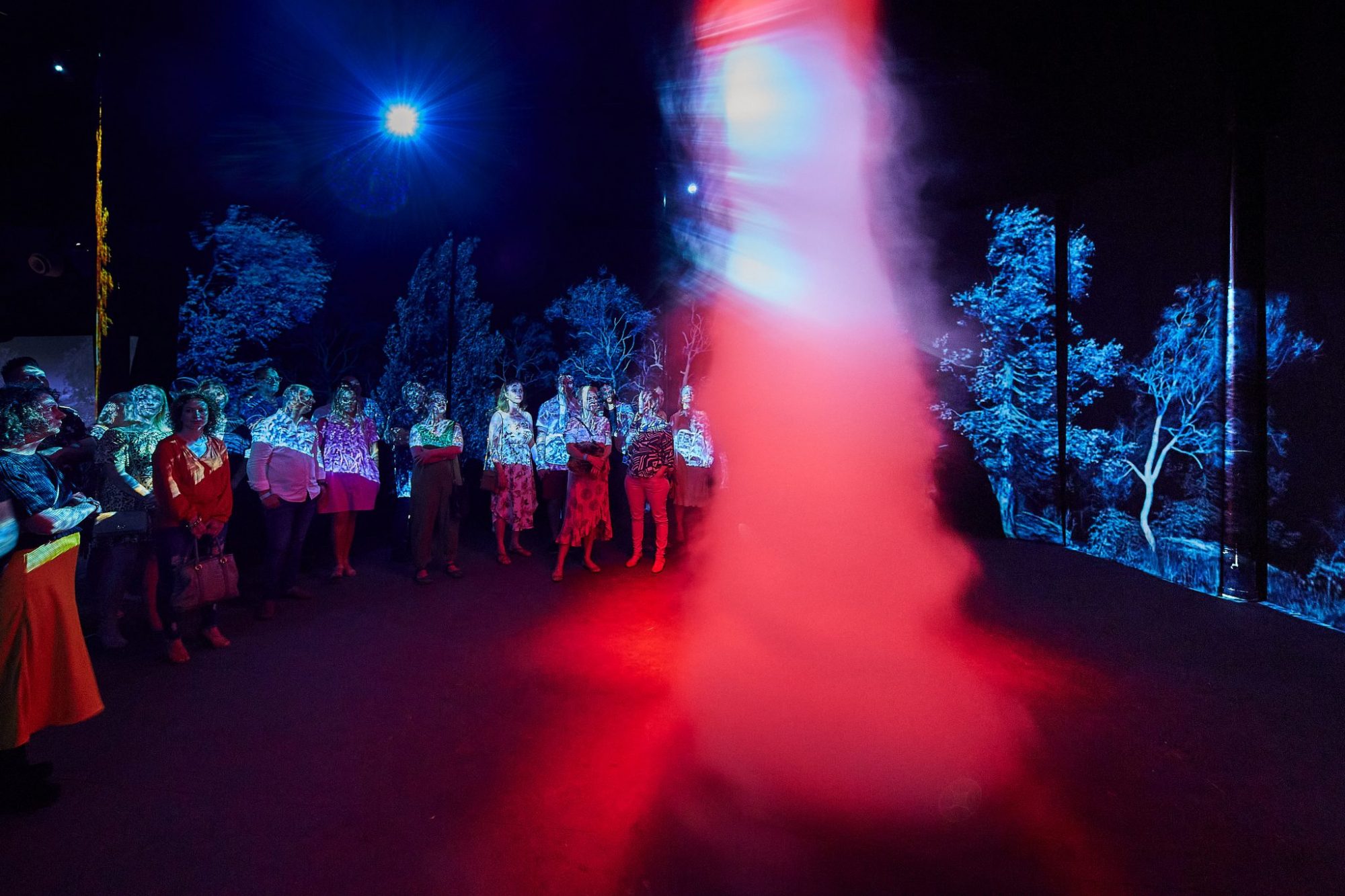 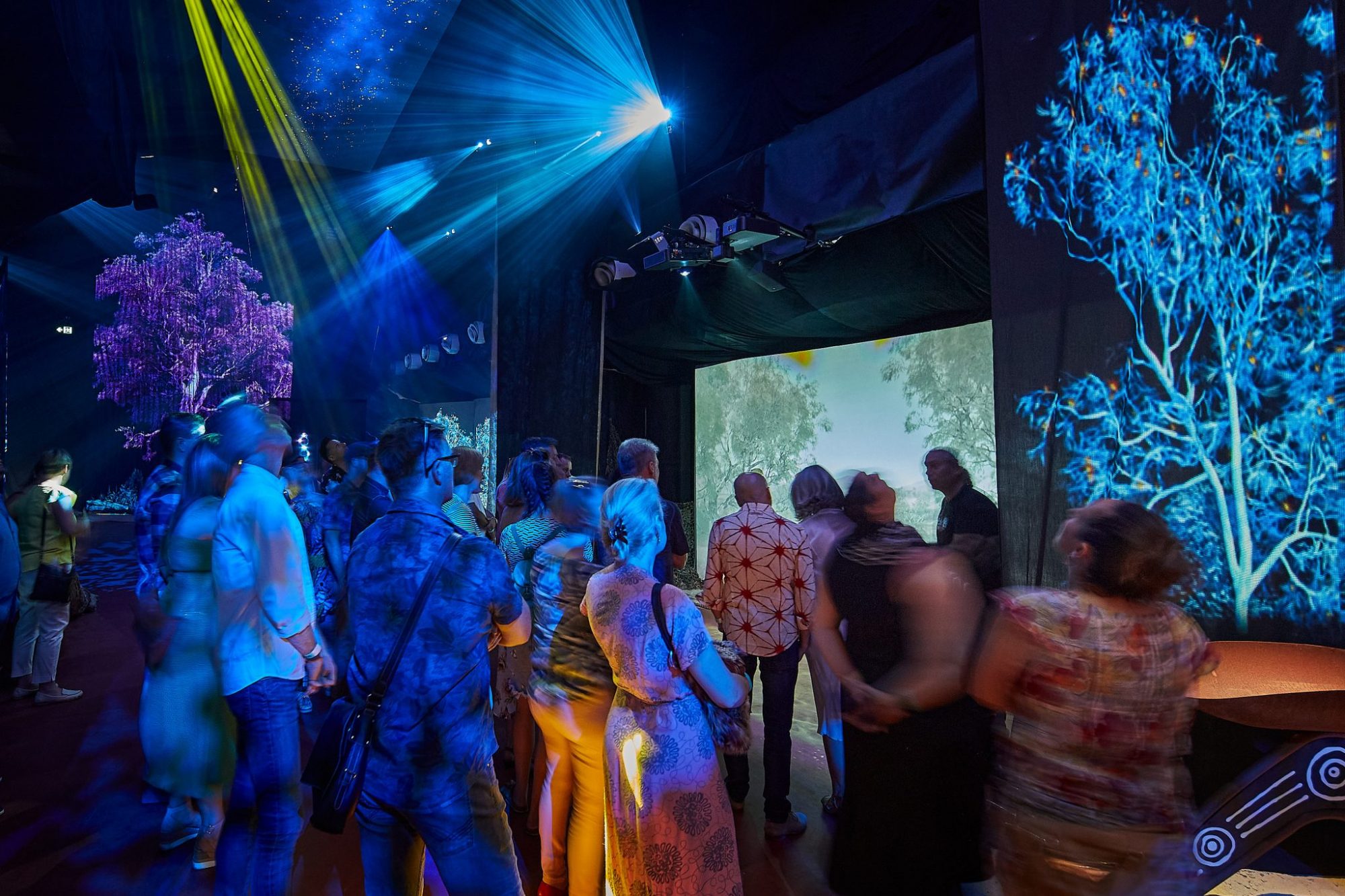 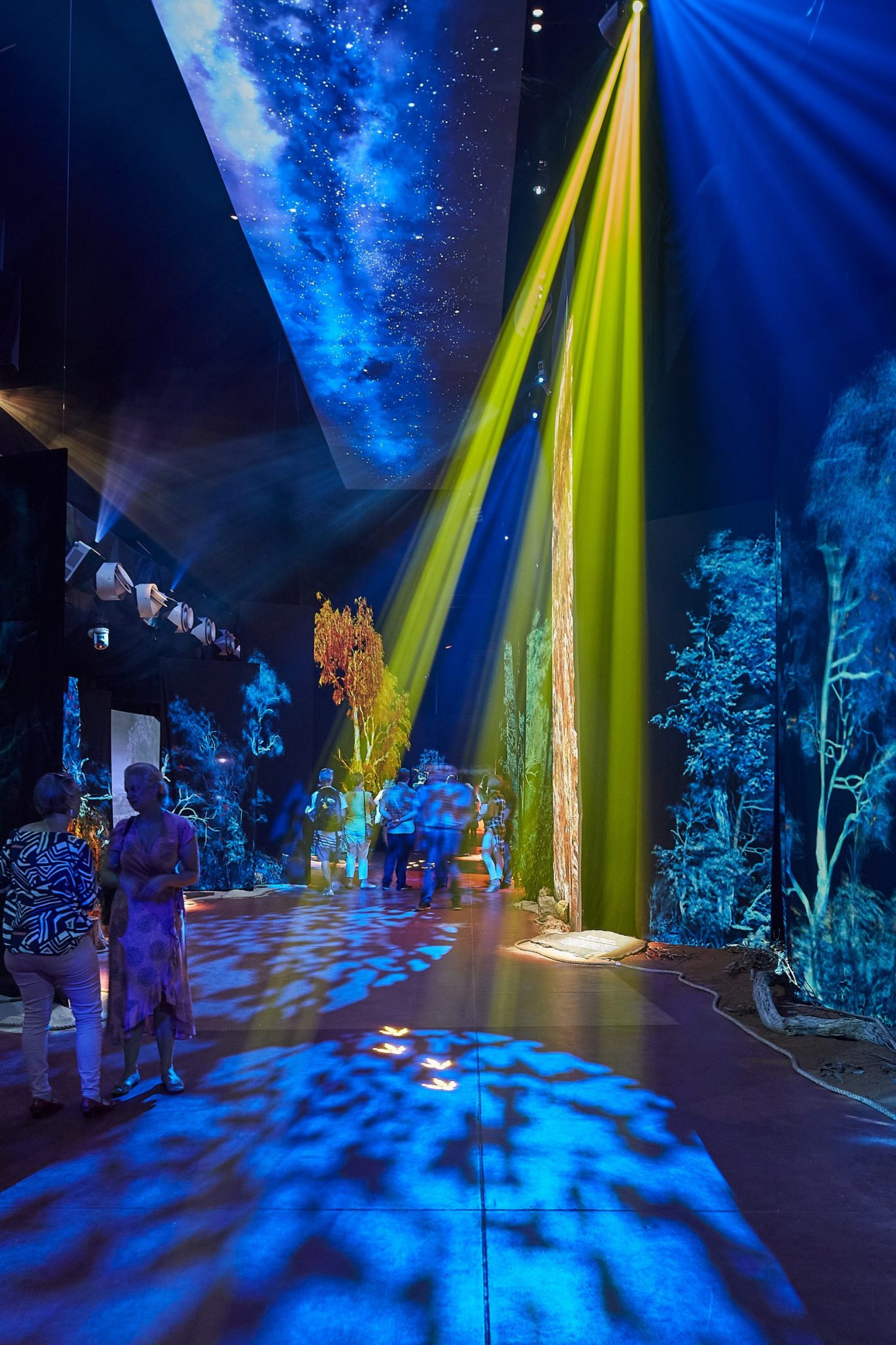