The epic Sky Song, which ran at a winery in the rolling hills of McLaren Vale, SA through March, was the world’s first feature length drone art event. As an astonishing 72 metre wide outdoor holographic screen carried projections of First Nations stories, UK company Celestial’s drones took to the sky to act as a flying extension to the projections, creating a continuous artistic canvas several stories tall.

Production provider Novatech got in a world first of their own, being the first company in the world to deploy ShowTex’s Cielorama outdoor holographic screens, confirmed by ShowTex’s Sven Peeters. “We supplied Novatech with four screens of 24m x 14m, set up three next to each other, creating a whopping 72m wide pano(Cielo)rama screen,” reports Sven. “These screens can tension out to 15m high and up to 70 metres wide without joints. Novatech was one of the first users of this product and were very collaborative during the testing phase of this setup. This is the first time Cielorama has been exposed to the elements for long periods successfully!”

Narrated by Archie Roach and featuring music and stories from Indigenous collaborators, Sky Song was a multimedia experience of ambitious breadth and depth. The artistic brief described Sky Song as “a cosmic journey exploring trauma, healing, and universal indigenous wisdom that connects all of mankind.”

When Archie Roach’s wavering voice sang Took The Children Away, many in the thousands-strong crowd wept. When the Paul Kelly with Kev Carmody version of From Little Things Big Things Grow started, the sound of the crowd gently joining in, almost in a whisper, made me tear up. Sky Song managed to be a crowd-pulling spectacle that transcended race, class, and politics, while being profoundly meaningful and technically innovative. That is rare territory indeed.

John Hopkins, Creative Director of Celestial, outlined the creative process that birthed Sky Song; “We got a soundtrack together first, including music and spoken word, and that in turn inspired the visuals. All visuals for the show were designed remotely at Celestial in the UK, working from concepts and material that had been discussed and developed with the First Nations collaborators.”

John Partridge, Production Designer for Celestial and lighting designer for Sky Song, explained how pre-vis for their drone art is handled; “We use 3D CGI software Blender and 3D content platform Unity to animate and visualise the drone animations. The full production site is modelled to scale within Syncronorm Depence 2 and then the drones are imported. This enables us to create a high-quality 3D visualisation of the entire show including lighting, projection, drones and haze.”

Part of the visual success of the show is that the imagery in the projections, which used the familiar dot art style of Indigenous Australia, are complemented by the drones, whose individual lights when flying are, obviously, dots. “We used that medium to project onto the screens and increase the canvas of the show,” confirms John. “The projections are made up from thousands of virtual drones, created in the same software.”

Sky Song’s video and audio content was run from QLab, which simultaneously outputs timecode to the lighting and drone control hardware. The lighting was run from a grandMA3 full-size console, with LTC timecode triggering 300 pre-programmed cues. The drone launch software referenced the LTC timecode to give a desired launch time, but the launch itself was manually triggered. Each of the 360 drones flying during the show had a 700 lumen RGB LED chip on its belly.

“Novatech were truly humbled to be involved in what is a world first, collaborating with Celestial, Adelaide Fringe, and Gluttony to tell First Nations stories through creative technology like never before,” said Novatech’s Managing Director, Leko Novakovic. “The combination of drone art, lighting and projection on one of the largest holographic screens in Australia is truly spectacular. Our team has been working on this for months, so it’s fantastic to see all our hard work come to fruition and receive positive feedback on such a special show.”

“Sky Song has been created as a collaboration that involves creatives and technologists at the table collaborating together from the very start of the process,” said Heather Croall, Director of the Adelaide Fringe Festival. “By adopting a co-design approach, we were able to all contribute, and a deeper project emerged as a result.”

After 30 minutes of profound and visually ground-breaking truth and story-telling from the oldest continuous culture on Earth, Novatech’s 32 Clay Paky Sharpy Plus shot beams of light into the evening sky to create an apex over the vast screen. They’d had four hazers running since before the show started, but we were outside, on a small hill near the coast, with a nice breeze. Somehow, the haze filled the air, and the beams went more than a hundred meters in the air, clear and defined. It shouldn’t have been possible, and it signified power, dignity, and hope. 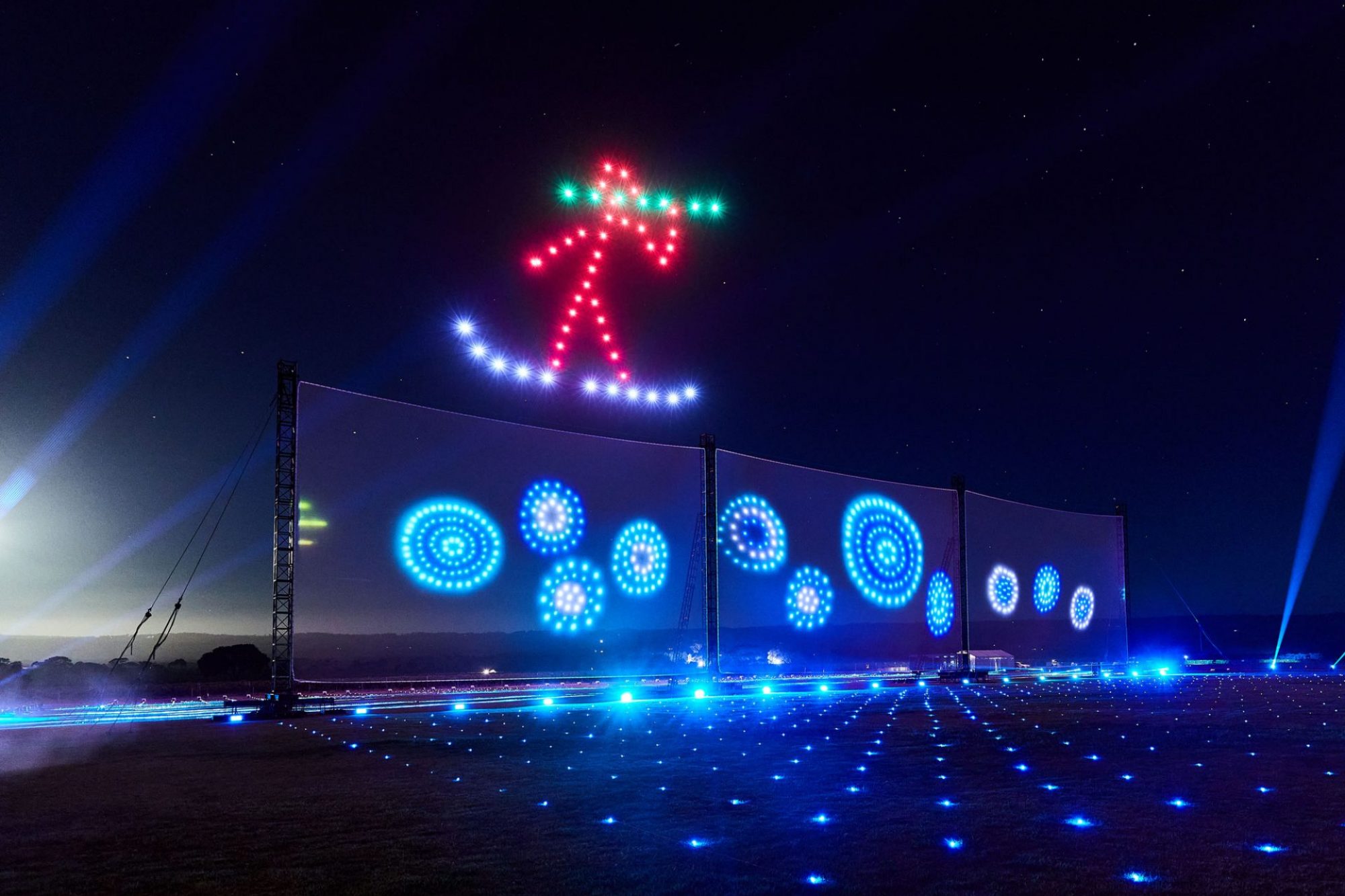 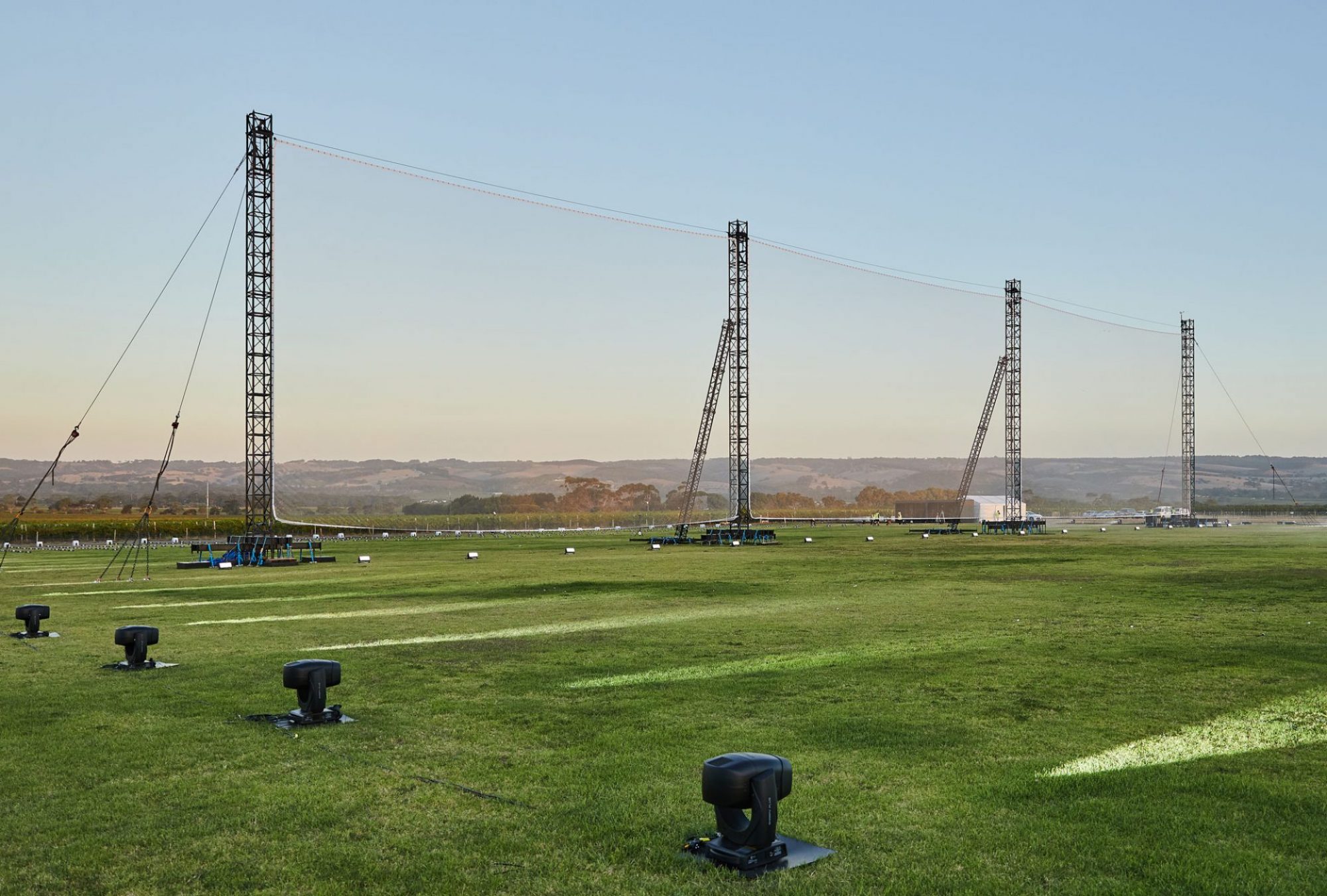 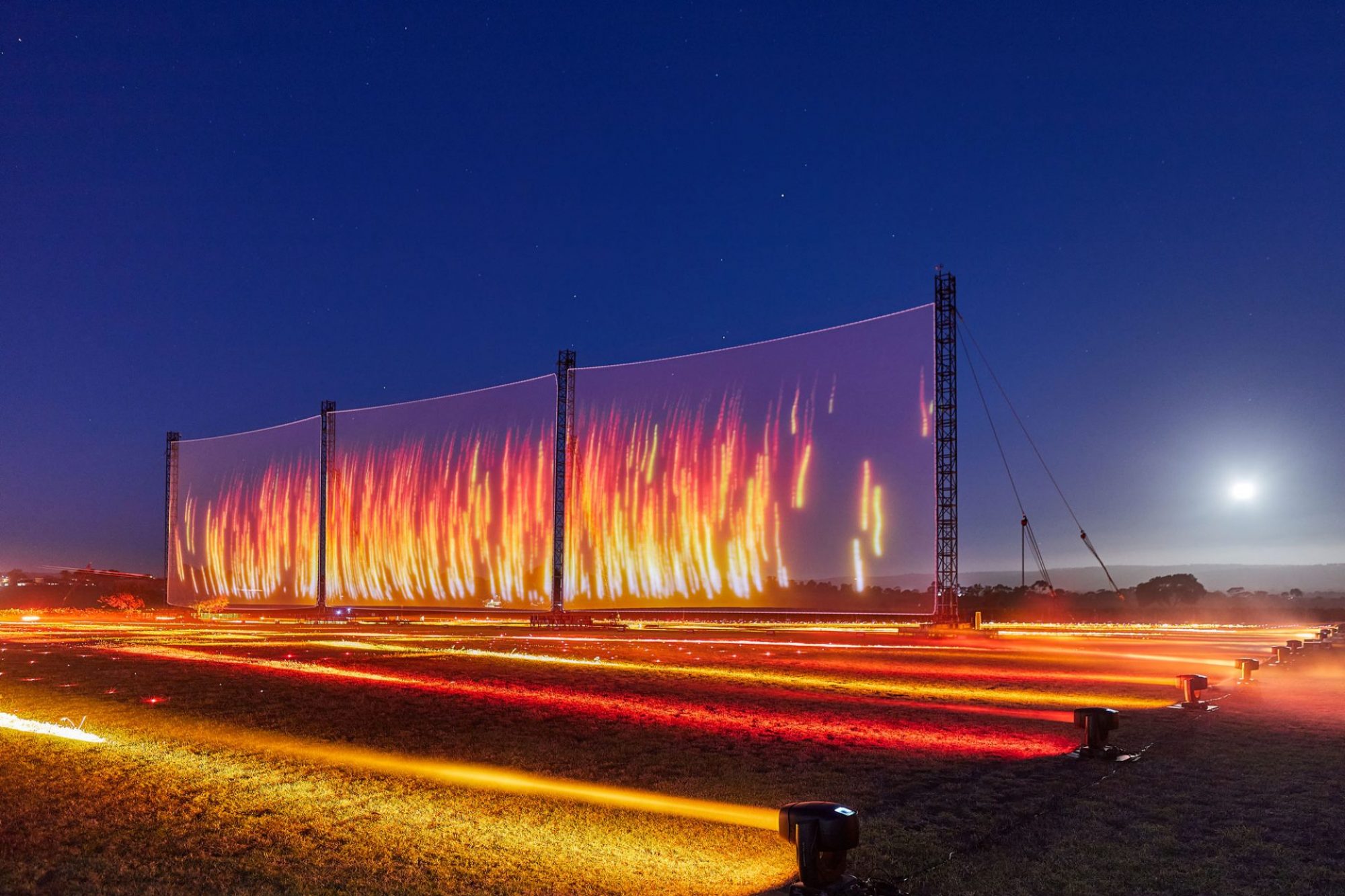 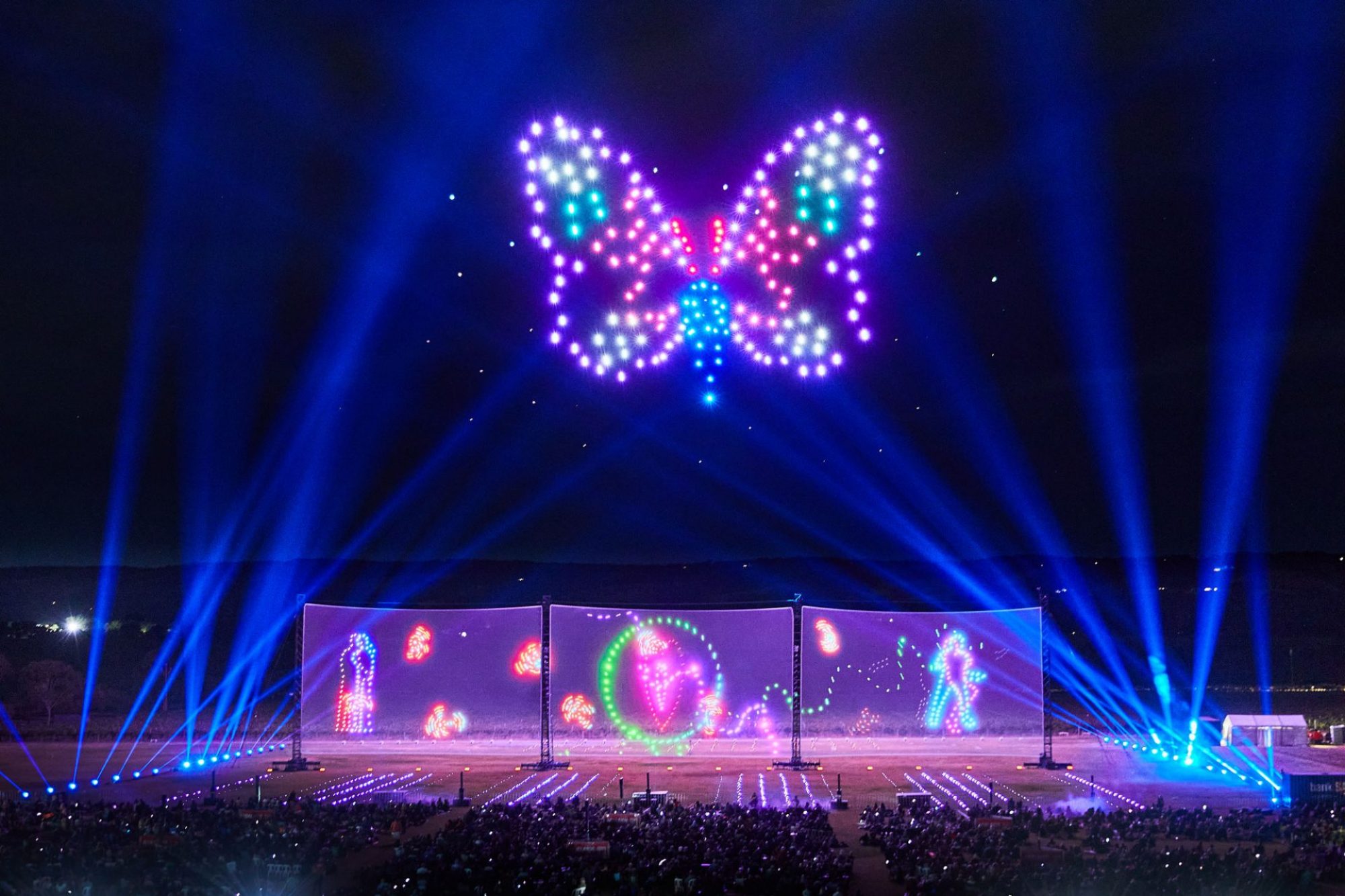 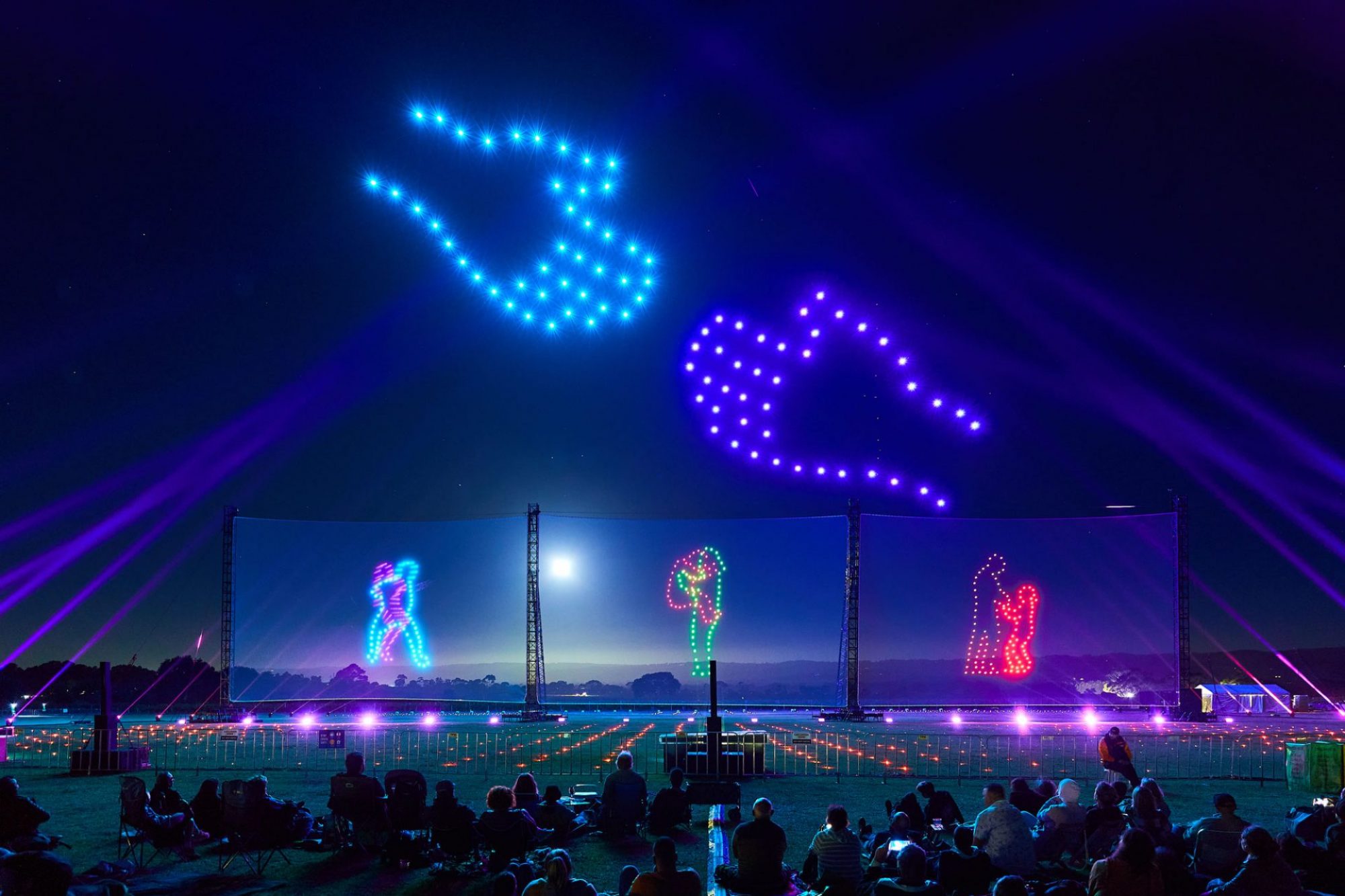 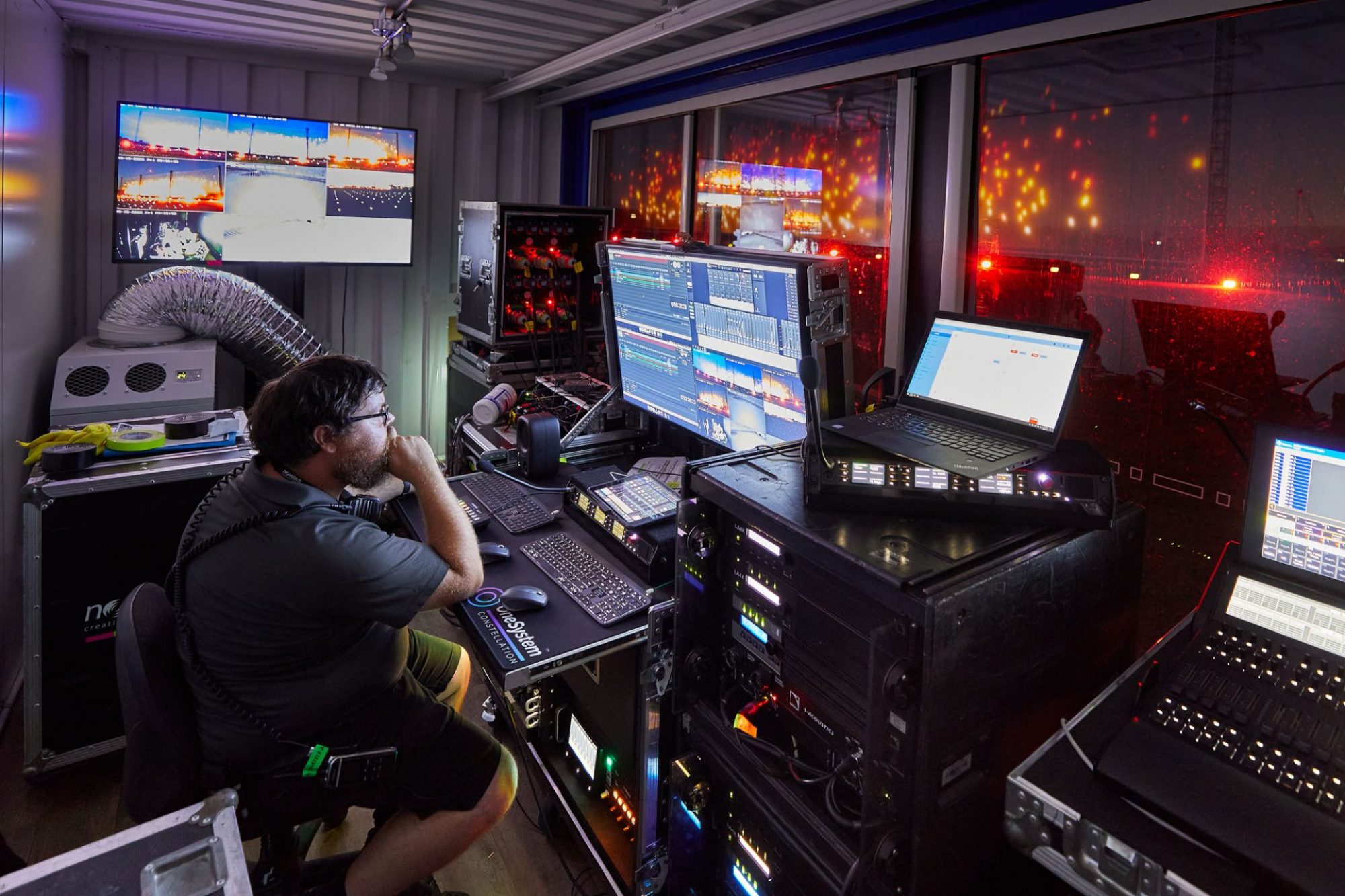 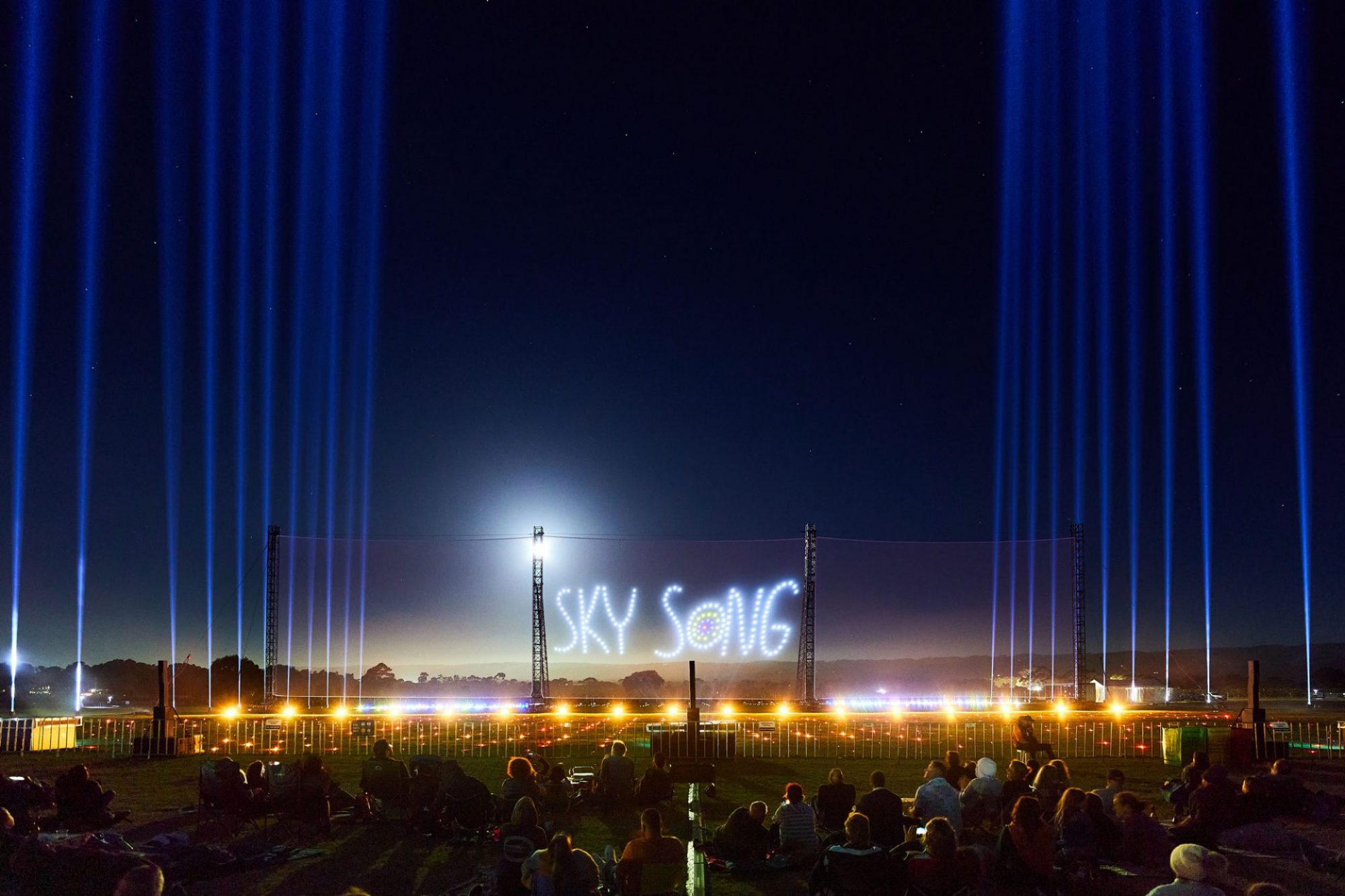 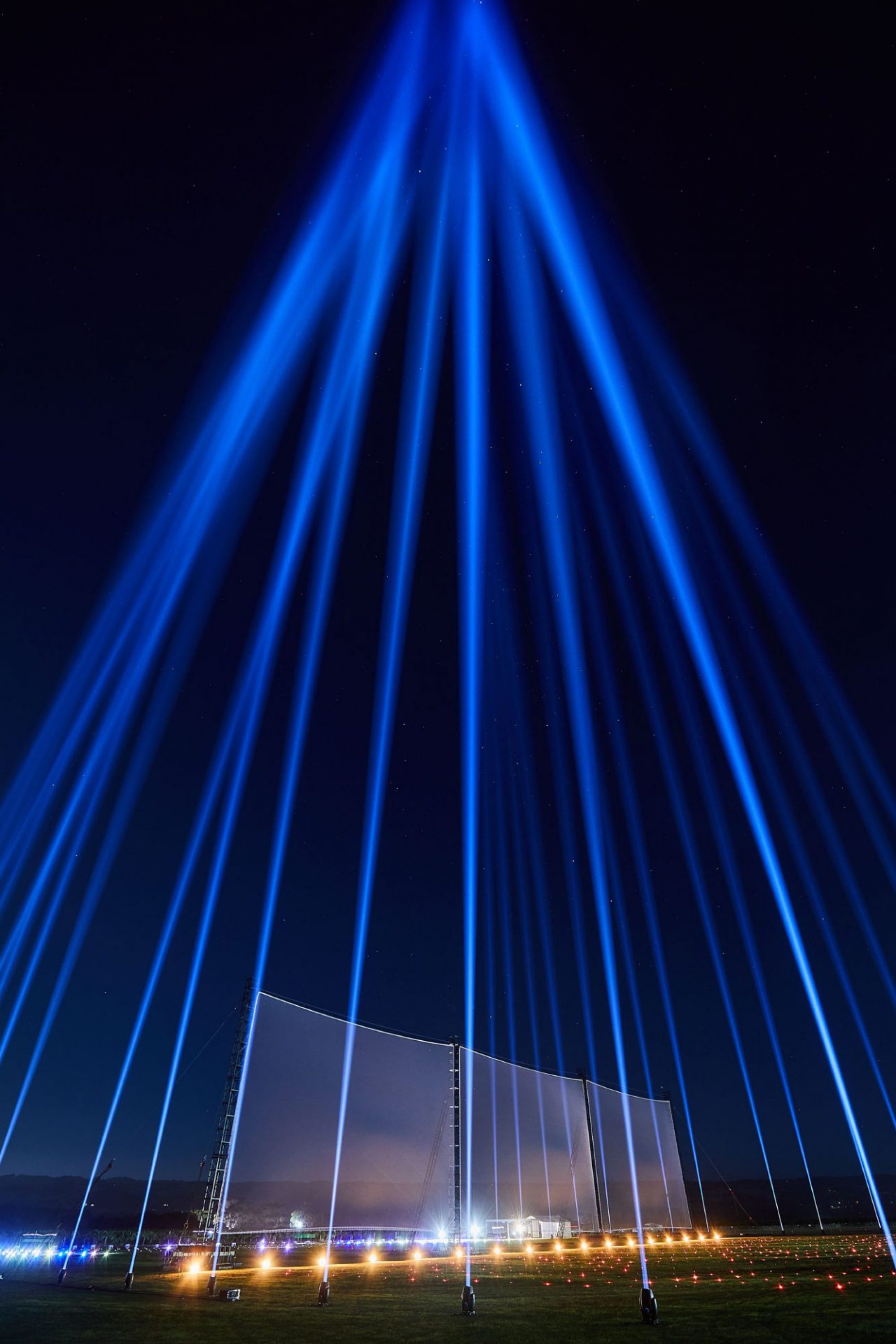